Cargo Ship Diaries: Getting To The Container Ship & Boarding

A slightly sunburnt and limping little old me – mostly from walking an average of 12 km on the previous five days around Singapore and semi twisting my ankle – in a long, flowery skirt not at all meant to be walking up gangways in. Drenched in sweat, the words of my grandmother echoing in my ears, “You should go in and see what it’s like, then leave if you want to.

Oh, grandma. I am not getting off this ship unless there is a medical emergency, or they drag me out. I didn’t sign fifteen forms and planned six months for nothing.

Approaching the commercial port of Singapore to board my cargo ship was all sorts of nerve-wracking. I say mine you may have noticed. Possessive much? I reckon you would feel similarly had you spend 6 months staring at it, as the screen saver on your phone and laptop.

Of course, I understand that I’m sounding like a madwoman. Months of dreaming about a piece of metal that carries tons of other metal? A piece of machinery where dozens of people work on for months on end, away from their families?

Having read somewhere that seafaring is the second most dangerous job on the planet, a fact that I did not broadcast to my family, friends and all those worrying about my safety, I was surprisingly unconcerned with safety issues.

What I was worried about was getting on the ship to start with.

The pickup was arranged beforehand. A lovely driver arrived promptly at my hotel’s entrance and I stumbled out, balancing two suitcases and trying to contain nerves that were half due to excitement and half to excessive nicotine intake.

It was a stunning day. The clouds that had been hanging out had disappeared and the humid hot days that Singapore is so known for were manifesting. The twenty-minute ride to the port felt interminable. My thoughts preoccupied with whether or not I would get to actually get on the ship. In my bag were two sets of printed forms, medical certificates, payment confirmations, passports, vaccination records and anything else I thought would be needed. Ready, set, go!

At the end the process was remarkably easy. My passport was checked, my name confirmed with that on a list and I was waved through.

Okay, fine it wasn’t actually that simple… here is how it went down.

Boarding a Cruise Ship as a Passenger

Transfer to and from the port is usually arranged through the company. The difference between a passenger and someone that works on the ship is just that you have to pay for it.

For Singapore, the cost of the transfer came to 60 SD.

In the beginning, I thought paying for transport is non-negotiable and just part of the booking process. I was not given the option of reaching the port another way.

However, I have since learnt that it is very possible to just rock up by yourself, albeit you will have to navigate the bus as only authorized vehicles are allowed to enter the port terminal. That means no taxis! The second passenger on my journey did take this option as he had been to the port before and was able to appease the custom agent that he wouldn’t get lost and miss the departure time.

But in general, I would recommend the pickup and drop off option as it is one less thing to worry about, especially if you have never been there before.

Once you arrive, similar to flying or catching a normal ferry, you get dropped off at immigration where your baggage is scanned and your papers are checked.

You pick your bags and walkthrough. Get to another chirpy immigration port official and announce you are boarding as a passenger.

They get your paperwork which is actually just your passport . That makes you wonder, why did I print all this stuff??

Another immigration officer asks you “Why are you travelling by container ship?” the first of many many times you will hear such a thing.

You try to assure them you are neither married to someone on board nor crazy. As far as ship life goes, these appear to be the only two options.

They wish you a pleasant trip, wave you through to your driver who is waiting outside again and off you go.

The port is like a maze and everything looks pretty much the same. Containers upon containers stacked on top of each other, moving, sliding, and flying above your head.

Finally, the first glimpse of the ship. What a glorious moment.

Nerve wracking is also an understatement as this is the first time I have actually stood next to one of these sea giants. The gangway looks so small and I am finally starting to see why they warn you about being able to lift your bags on your own.

My biceps are definitely not ready for this but I brace myself to make it up the narrow, jumpy steps and not embarrass myself. I am also profusely sweating.

My driver is probably the friendliest person I have ever met in my life, which sets the tone for all the people I will meet during this trip.

He instructs me to wait while he calls on some of the guys to come down to grab my luggage. Whistle calling style!

He looks at me like I am crazy and I am even more stressed now because I signed a document saying I have to carry my own bags but someone else is made to do it.

At that moment, the smiley driver looks at me like he has just realized something very important.

“You not wearing any gloves. Your hands will get dirty.”

Off he goes to his van to get out a pair of work gloves so I don’t dirty my hands holding on to the oily rail on the way up. Honestly, how much friendlier can this person get?

After a few more whistle calls and quite a bit of shouting, me still standing there in a flowery skirt with gloves on, looking like a spoiled princess, a friendly and very strong guy walks down to assist me, grabs the suitcases like they are made out of feathers and walks up.

I follow, trying not to look down, kinda panicking and very aware that everyone must be looking. Bye bye driver!

The outside corridor of the ship is much narrower than I imagined, and the container ships are already zooming past our heads and sliding into their pre-assigned slots.

At this moment, another officer comes toward me to take my bags which I am instructed not to touch. Obviously, he can tell that I can’t manage the narrow stairway and the suitcase at the same time.

Up some stairs, down some others, through a door, then another, I am so lost already but we are now inside.

It is so hot and stuffy.

The smell of oily diesel fumes, cigarette smoke and salt lingers everywhere. The humming of all moving compartments in and around the vessel reminding you that this peaceful giant is meant to be cruising the seas not sitting in port. Every minute of loading is crucial and it translates to one thing, money.

The faster it can get out of here the better it will be for everyone.
This noisy and smelly beast is now my home for the next four weeks.

Is it weird I sometimes miss the smell and sounds of container ships?

Anything you want to share about your experience boarding a cargo ship as a passenger?

5 Things You Should Know About Travelling on a Container Ship

Why Would Anyone Want To Travel By Containership? 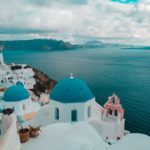 Winter Escape To Santorini – What To Do, Eat and Estimated Budget